Martin Margiela: In His Own Words

Fashion has never been a topic of much personal interest to me, though I have always appreciated when people select their attire with a bold playfulness. Anyone who has marveled atLady Gaga’s coats comprised of Kermit the Frog puppets or Sia’s outfits that strategically conceal her face are bound to enjoyReiner Holzemer’s new documentary on the tirelessly audacious Belgian fashion designerMartin Margiela. Like the director’s 2017 profile of Dries Van Noten, “Martin Margiela: In His Own Words” explores how its titular subject is driven by ideas rather than ego or a desire for stardom.

His refusal to be photographed prevents the picture from having the behind-the-scenes footage that enhanced Holzemer’s “Dries,” yet the film still manages to capture a fully dimensional portrait of the fashion icon, relying heavily on the audio of his frequently exuberant recollections. Though Margiela’s face can be readily found via a simple Google search, Holzemer wisely respects his subject’s preference to remain in the shadows, a decision that serves as a striking rebuke to modern technology awash in narcissistic self-promotion. Apart from its ample eye candy, the film deftly illustrates how one can live a life of integrity in any profession, provided one has the guts to break the mold.

Mere minutes into the picture, we find ourselves in Margiela’s studio, where the elusive designer—with only his hands visible onscreen—shares various sketches and other revealing archival materials from his past. In an era where smartphone apps and embedded ads are constantly vying for our attention, Margiela’s insistence on stripping his work of excess is all the more welcome in how it invites us to fully absorb his artistry while shutting out the surrounding noise. The first shop of his fashion house Maison Martin Margiela, which he co-founded in 1987 with fellow Japanese design enthusiast Jenny Meirens, had interiors that were completely white, containing furniture that was either painted or covered in cotton.

Margiela admits that it took him four years to place his name on the blank label of his house’s clothing, which was distinguished by four visible stitches that often puzzled onlookers, prompting them to take a closer look.New York TimescriticCathy Horynrecalls sitting on a washing machine in a Salvation Army depot, Margiela’s selected setting for his latest fashion show, and realizing that the designer’s enigmatic persona forced journalists such as herself to “be more creative” in how they thought about things.

也许更强硬的电影可以一直对马rgiela’s reasons for shunning the limelight. The controversy triggered by an early show held outdoors—far from the typical urban locations—in which local kids gleefully stormed the runway is only briefly alluded to. Some critics accused the designer of exploiting disenfranchised children by using them as props, yet such an unfeeling act would stand in direct contradiction to how Margiela values the humanity of his models. Four women who were previously dressed by him attest to how he treated them with finesse, rather than handling them with the roughness of other male figures in the industry.

Though his parents were embarrassed by his dream of becoming a fashion designer in Paris, Margiela received nourishing support from his grandmother, a dressmaker who crafted fashionable clothing for his Barbie dolls that functioned as his first models. The notion torpedoed by Horyn that Margiela’s penchant to frequently cover the faces of models indicated his stance against women is further put to rest by his blatant liberation of female identity. He favored street casting for his models, instructing them to walk the way they came in and even make eye contact with the audience. As defined in the film, Marigela’s ideal woman reflected the social movements unfolding on the streets: she had a career, a sense of humor and wasn’t defined by her sex appeal. As fashion guruCarla Sozzaniputs it, Margiela’s work is about something “much deeper than clothes.”

Having said that, the most entertaining sections of the film derive their pleasure from the sheer spectacle of Margiela’s eye-popping and endlessly unpredictable creations. While serving for years as an assistant to his idol, the recently retired haute couture designerJean Paul Gaultier, Margiela learned to “do with what you have” by finding new ways to utilize existing materials, many of which he stumbled upon at flea markets. This eventually led him to make clothing items that dissect the intricate process of garment design in a way that makes us less prone to taking them for granted. The audible shock and excitement that greets his ingenious repurposing of found objects is not unlike the receptionMarlene Dietrichreceived upon stepping onstage in a tux and top hat in 1930’s “Morocco.” From the Broken Plates Waistcoat and Plastic Grocery Bag Top to a fashion line of vintage theatre costumes and jewelry made from ice that changes the color of the clothing below as it melts, Margiela’s consistent subversion of form is a joy to behold.

What’s interesting about Holzemer’s film is how little drama or conflict it contains, even when Margiela makes the startling decision to permanently leave his cherished profession on the day of his fashion house’s twentieth anniversary, an event that bookends the narrative. Once Italian entrepreneur Renzo Rosso acquires Margiela’s company in 2002, the designer finds himself gradually being relegated to the role of artistic director. The demands of a brand management marketing department prioritizing vocabulary like “sexy” over Margiela’s signature brand of mystery proves to be disillusioning, as does the live-streaming of fashion shows that spoil their ability to subsequently surprise the rest of the world.

There’s no denying how painful it was for Margiela to leave his devoted team by vanishing overnight, yet the retiree sounds wholly content in his decision, pleased with the work he made and how its influence continues to ripple across the world. Nevertheless, the film’s very last moments affirm that the designer still has much more to say. What other wonders could Margiela have in store for us? Here’s hoping they include a face mask so enticing that every American will be compelled to wear it outdoors for the foreseeable future. After all, no one has proven more gifted at keeping himself fashionably anonymous.

Into the Dark: The Current Occupant 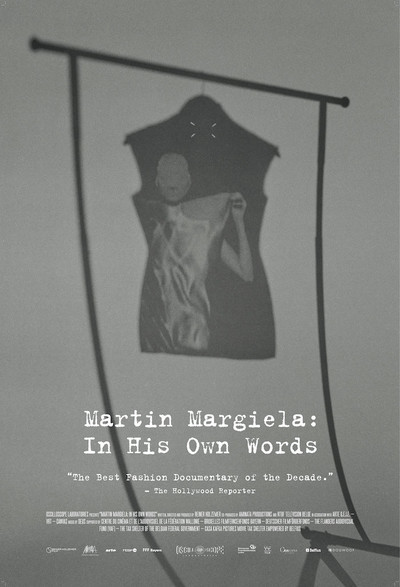