There are a few recent movies that I wish I could’ve seen projected in a movie theater. Not just for their seductive wide-angle compositions or beautiful on-screen performers—an immersive sound design, sometimes based on a moving score, can also be transporting. I wondered what writer/directorMahamat-Saleh Haroun’s warm Chadian drama “Lingui, The Sacred Bonds” sounds like in a movie theater as I watched it on a desktop computer with noise-cancelling headphones. Sound designerCorinna Fleigdoes a lot to suggest the character of N’Djamena, Chad’s capital and the main setting of this slice-of-life drama about a mother and her pregnant teenage daughter.

Fleig and her team give a subtle, but vibrant sense to N’Djamena, and the soft buzz of motorcycles and field crickets gives viewers a clear sense of where this movie takes place. Haroun’s protagonists—anxious but withdrawn single mom Amina (Achouackh Abakar Souleymane) and her 15-year-old daughter Maria (Rihane Khalil Alio)—often struggle to articulate how they feel. But Amina and Maria always clearly communicate who they are, and Fleig’s sound design helps us understand how Haroun’s characters both resist and are shaped by their impassive, beautiful environment.

Amina and Maria’s story has a low, but sustained level of emotional intensity that’s hinted at in the movie’s title. In the press notes, Haroun (“A Screaming Man”) explains that “Lingui” signifies a “bond or connection” that “implies solidarity” and “mutual aid.” Amina and Maria have this sort of unspoken—and mostly implied—relationship, though it’s not sentimentalized or over-stressed in any cloying way. Maria hates it when her mother calls her “Mamita,” and often says as much. And in one key scene, Amina tries to raise a million Central African francs (for her daughter’s illegal abortion) by offering herself to her overly familiar neighbor Brahim (Youssouf Djaoro). Haroun finds the drama in these interactions simply by showing us how life’s big moments are only spikes of emotional intensity. We watch Amina and Maria move with or against criss-crossing streams of car traffic, at the beginning and towards the end of the day; they struggle to maintain a connection between these episodic scenes.

Much of “Lingui” concerns little moments that can either develop into disappointment or hope for whatever comes next in the day. Haroun’s movie is not just about how Chadian women make do in a patriarchal society, though it is about that, too. Sometimes “Lingui” establishes its dramatic stakes by immersing us in the textures and tempo of Amina’s shapeless, but busy day, like when she strips tires and weaves metal wire into “kanoun” stoves, which she carries by hand (and on her head) across town.

And sometimes “Lingui” reminds us that character reveals itself when you’re not paying attention. Amina begs her mother for an abortion by an open window, and the light from the partly shuttered frame creates a halo-like silhouette. Her mother also has a glow thanks to Haroun’s impressive collaboration with regular cinematographerMathieu Giombini, but it’s nothing compared to the one surrounding Alio’s face after Maria’s told that “Muslims can’t do that.” “I don’t give a damn,” she replies. “Leave me, I don’t want it.”

很容易想象一个电影像devolvi“麟贵”ng into an overheated arthouse message movie given its focus on Maria’s desperate situation. It rarely does, despite a couple of distracting plot contrivances involving an insensitive Imam (Saleh Sambo) and Djaoro’s sleazy would-be suitor. More often than not, Haroun and his collaborators quietly mine their N’Djamena locations for their dramatic potential, like when Maria peeks around the corner of an alleyway as she trails after her mother. The camera moves with Alio’s head and shows us Amina sitting by herself, seemingly unaware (or unbothered) by Maria’s nearby presence. This is an evocative image that doesn’t really advance the story or its themes. It's just an incidental expression of longing that also shows you who these characters are to each other. No matter how the enveloping scene develops, this brief moment also illustrates what Haroun means when he says (again, in the movie’s press notes) that he aspires to reflect a kind of “social reality” through “banal scenes” that take on meaning “little by little.”

Fleig’s sound design also exemplifies Haroun’s subtle and often disarming focus on social realism. We track the steady shuffle of Amina’s sandals as she moves through a varied, but rarely overwhelming ambient soundscape. And as we tag along with Haroun’s characters, we learn to appreciate their story as a small, but vivid study of lives that are so much more than their progressive developments. I hope to revisit “Lingui” in a movie theater, if only so I can tune in again without covering my ears.

We Need to Talk About Cosby 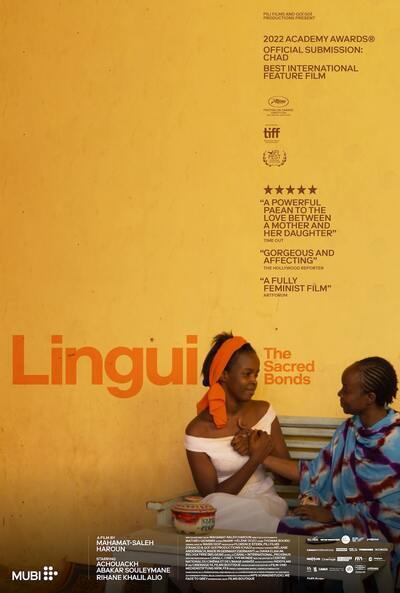 about 23 hours ago
Advertisement